The event that had been scheduled for May 3, 2016, Culture with NO Limits, has been postponed.  It will take place on June 7 at 7:00 PM at the same location (The Spanish Benevolent Society, La Nacional, 239 West 14th St., Manhattan, New York City).  My apologies to everyone for the inconvenience. 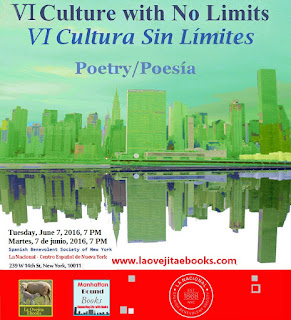 I didn't know, two years ago, when I posted about the 300th anniversary of the birth of C.P.E. Bach, what kind of adventure would follow.  I've discovered a rich collection of beautiful music, in which every page begs not only to be read, but repeated, savored, treasured.  This coming Tuesday evening, March 3, 2016, I'll be continuing that exploration, by playing C.P.E. Bach's Sonata in D Minor, W. 6/15.  Not all of his music works on a five-octave keyboard, but this piece certainly does.

For those unfamiliar, Culture with NO Limits has been a place to cross boundaries.  Previous events have included readings in Spanish, French, Portugese, English, and Esperanto, and songs in Spanish, Basque, Esperanto, Azerbaijani and Bengali.  This event will extend the tradition.