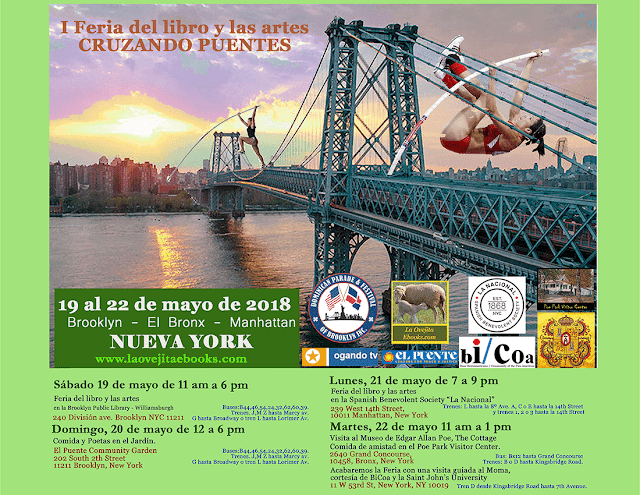 An intercultural arts festival, Crossing Bridges, will take place in New York City from Saturday, May 19, 2018 through Tuesday, May 22, 2018, and I've been invited to write and perform a new piece at the opening event! The event will take place at the Brooklyn Public Library at 240 Division Ave. in Williamsburg, Brooklyn, from 11:00 AM to 6:00 PM.

I'm excited.  Events like this are a big deal for me, because there's a chance to meet so many wonderful people, and hear and read so much fine writing of all kinds.  Being invited to perform a piece of mine is icing on the cake!

This, however, requires a new piece, and that takes thought and work.  I've decided to take you along on the journey.

At an event in 2016, I presented a song I'd written, about a gardener who separates the fallen leaves (this was in fall/winter) carefully by color.  Of course, the wind comes along and mixes them up again, and the gardener thinks, "Isn't it more beautiful this way?"   The song is in Esperanto, and it's written in a mode known in Persian music as Avaaz-e Bayaat-e Isfahaan, in Azerbaijani music as Şüştər (Shushtar), and by other names in other musics of the general area.  You probably already know this mode, even if you know nothing about Central Eurasian or Middle Eastern music, because it has the familiar augmented second, much like the Western harmonic minor scale.  When anyone from the West first tries to write Middle Eastern-sounding music, this mode is the one they usually fall into.  It's probably about as intercultural as you can get.

For this event, I'd like to do something different.  I've been given a poem for inspiration, but I'm planning a keyboard piece.  The poem is called "Cruzando Puentes" ("Crossing Bridges"), and it's by Juan Navidad.  On a quick reading, the line that captures my attention is about "the most beautiful dreams" being "written from rage and injustice" (my translation).  I think I can work with that.